This telegram was received by my step great-grandfather in July 1927. In many ways this is an early tweet and the 19 words made me think.

What did The King want, and using some poetic licence I have tried to describe two men and their memories.

The King had abandoned the Tsar in 1917. Diggle had in September 1918 been in command of the ill fated H.M.S Glatton with the subsequent deaths in home waters. 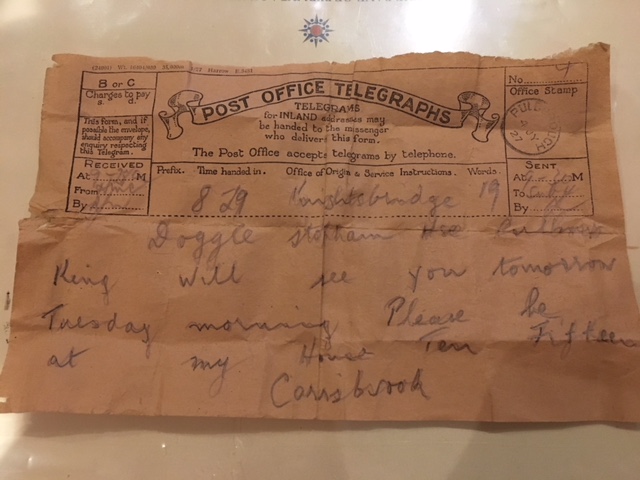 A thick carbon ink stares out to me

A question from the men at sea.

Who was more troubled from those years

And yet neither could shed their tears.

Burdens they shared as men of fate

They had never asked for that weight.

For entombed men, ratings and the Tsar

Who were consigned away so far.

Did they take wine as they lunched

Or did they just sit hunched.

How did they close their ears to the bang

Of watertight doors that shut with a clang.

And as he sat on a peasant chair

He swept his hand over his wife’s hair.

I wish to know what burden they endured and kept

As dead man and sailors slept.